You are here: Home / Travel / 5 day Walt Disney World visit in late February
(this post may contain affiliate links, which means I get a small % back if you purchase after clicking, at no cost to you- refer to 'legal stuff' in the menu for more info)
57 shares 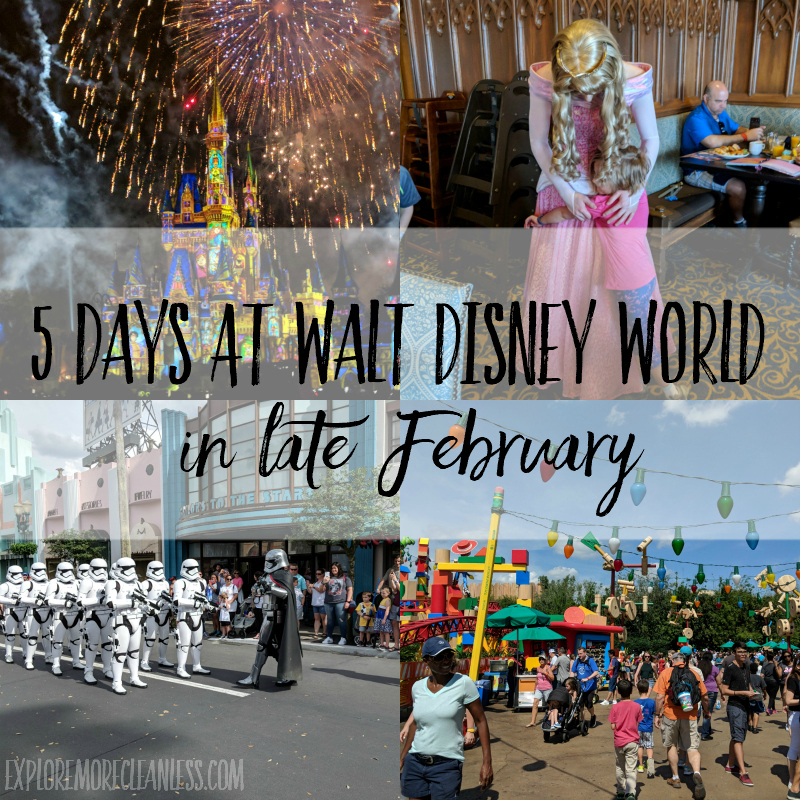 Three or four years ago, I would’ve told anyone who would listen that I had zero interest in Disney World but here I am, sharing our 5 day Walt Disney World visit in late February 2019! I never went as a kid and pictured it as expensive, hot, crowded, and a complete waste of time. Our family has never been Disney super fans, but we have enjoyed a few of their movies as my kids got older and I started to dig around a little more. I posted in a travel Facebook group asking if it would be worth it if we weren’t crazy into Disney and got some very passionate responses back, pushing me over into the camp that I wanted to decide for myself!

People love to hate on taking vacations to Disney, and I went into it with a skeptical mind, but we really did have a good time. Don’t get me wrong, it was crazy expensive for what it was, we will be visiting England and Wales for cheaper this fall. When pressed to articulate what was so fun, I think it was the feel of an all inclusive vacation with just enough choices and lots of activity! My kids also loved 90% of everything and truly lit up on some of the rides, which of course was a treat for us to watch. It sounds silly but it reminded me a little of Halloween, there was just a hum of excitement from kids and adults alike. People were chatting with strangers on the shuttle bus, being friendly, etc., it was a fun atmosphere.

So, I’m not out to convince anyone that they have to go to Walt Disney World, and I’d always vote for an international trip over Disney if you have to choose, but I do want to share what we did and explain how I went from hating the idea to planning our second trip back for next year!

We visited in late February through early March, which was marked as a “low crowd” time. The weather was perfect; warm enough to swim but not hot enough to be miserable in the parks. We got rained on once but it didn’t damper our stay. Our kids were almost 4 and 6 when we visited, no longer napped, and were used to long hiking vacations, so we skipped the strollers and used a backpack for each of us. We drove down and stayed on site!

Pin this post about important tips for planning your first Disney World trip with this link or collage photo: 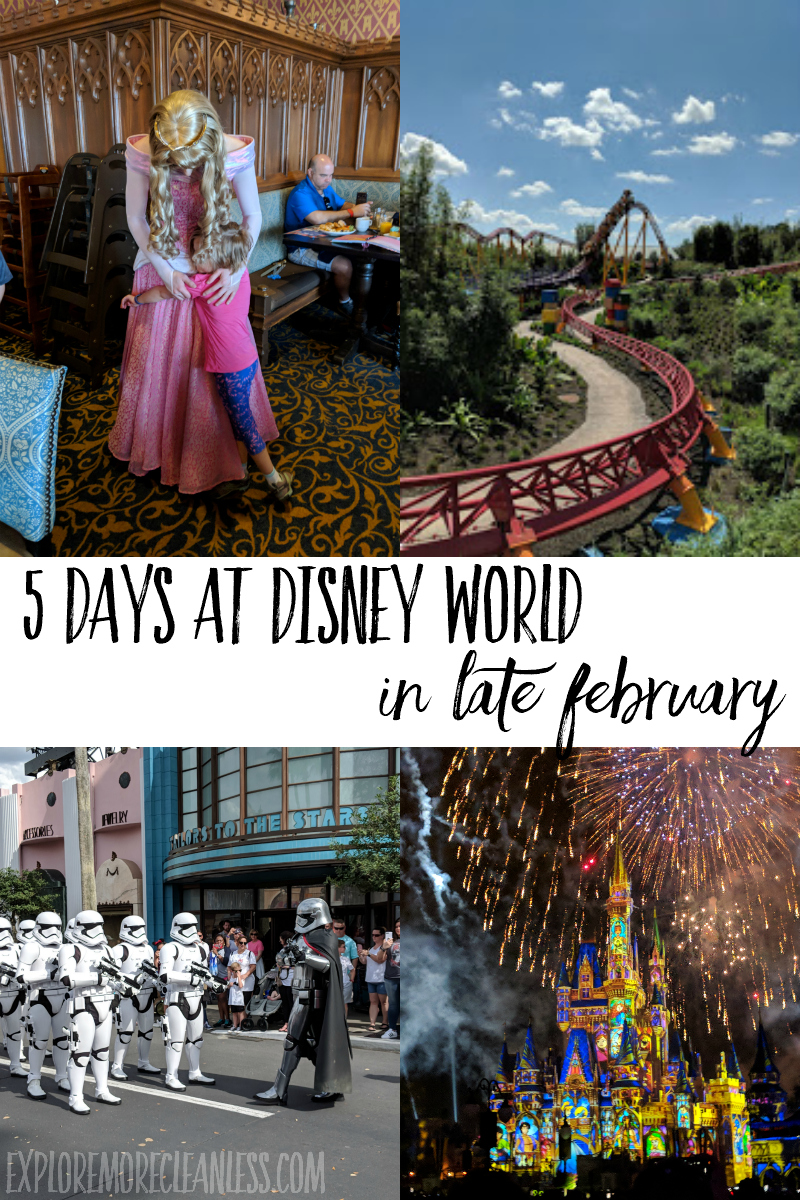 We stayed the entire trip at the newly renovated Pop Century resort, which is on-site for WDW but one of the cheapest options. 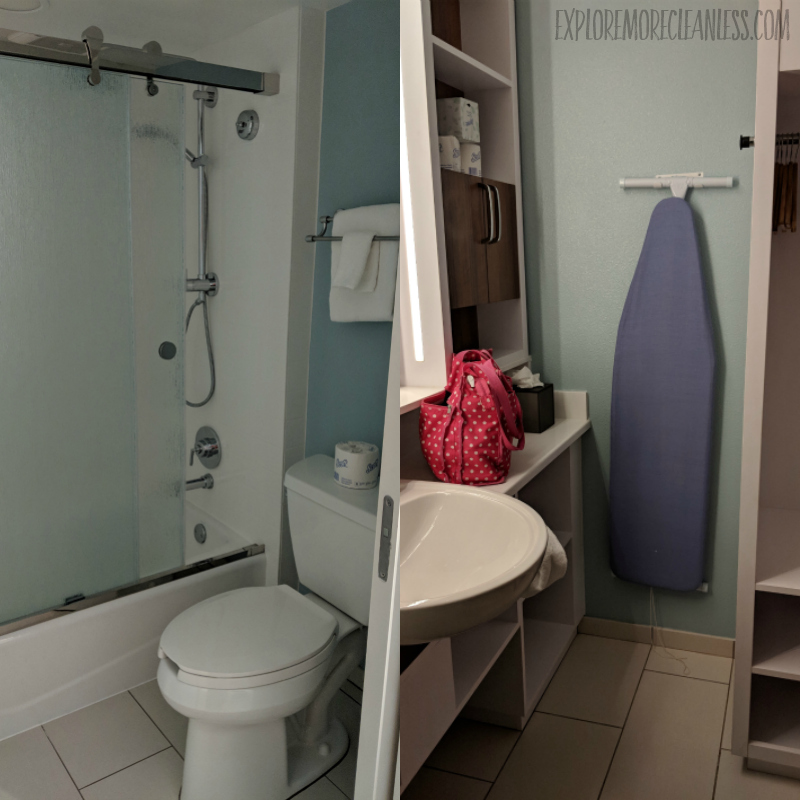 The bathroom was super nice; I appreciated that they switched to non-disposable toiletries to reduce plastic waste. We opted out of “mousekeeping” since we were basically just sleeping there, which gave us a gift card back to spend in the park! 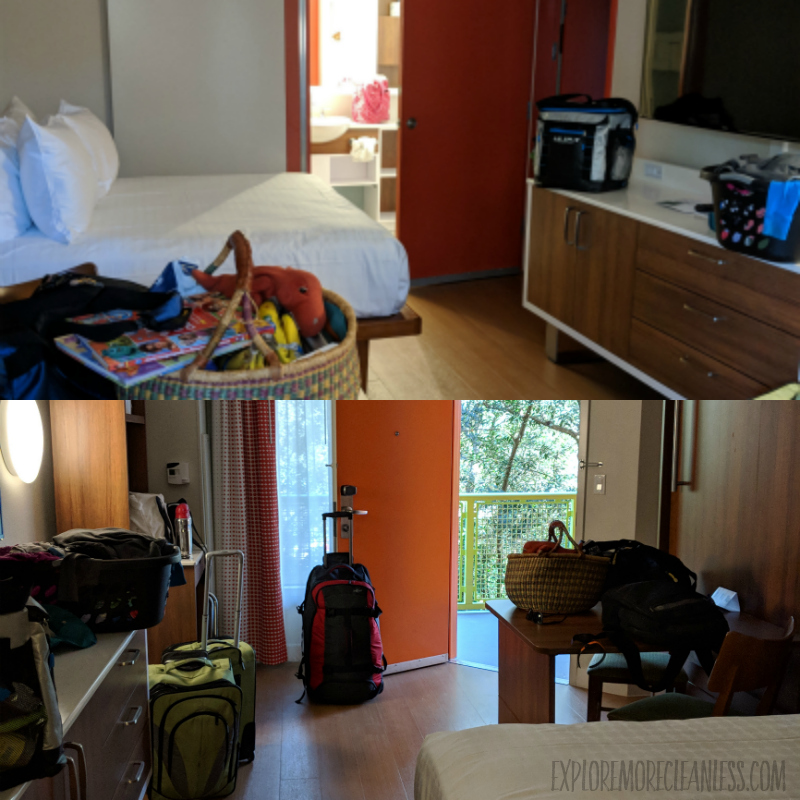 That desk? It’s a murphy bed! I love how the space was set up. There is a small fridge in the corner – no microwave but we used the one in the cafeteria. It was pretty comparable to a cafeteria at a zoo or museum, we ate there once or twice out of convenience and it was fine but not notable. 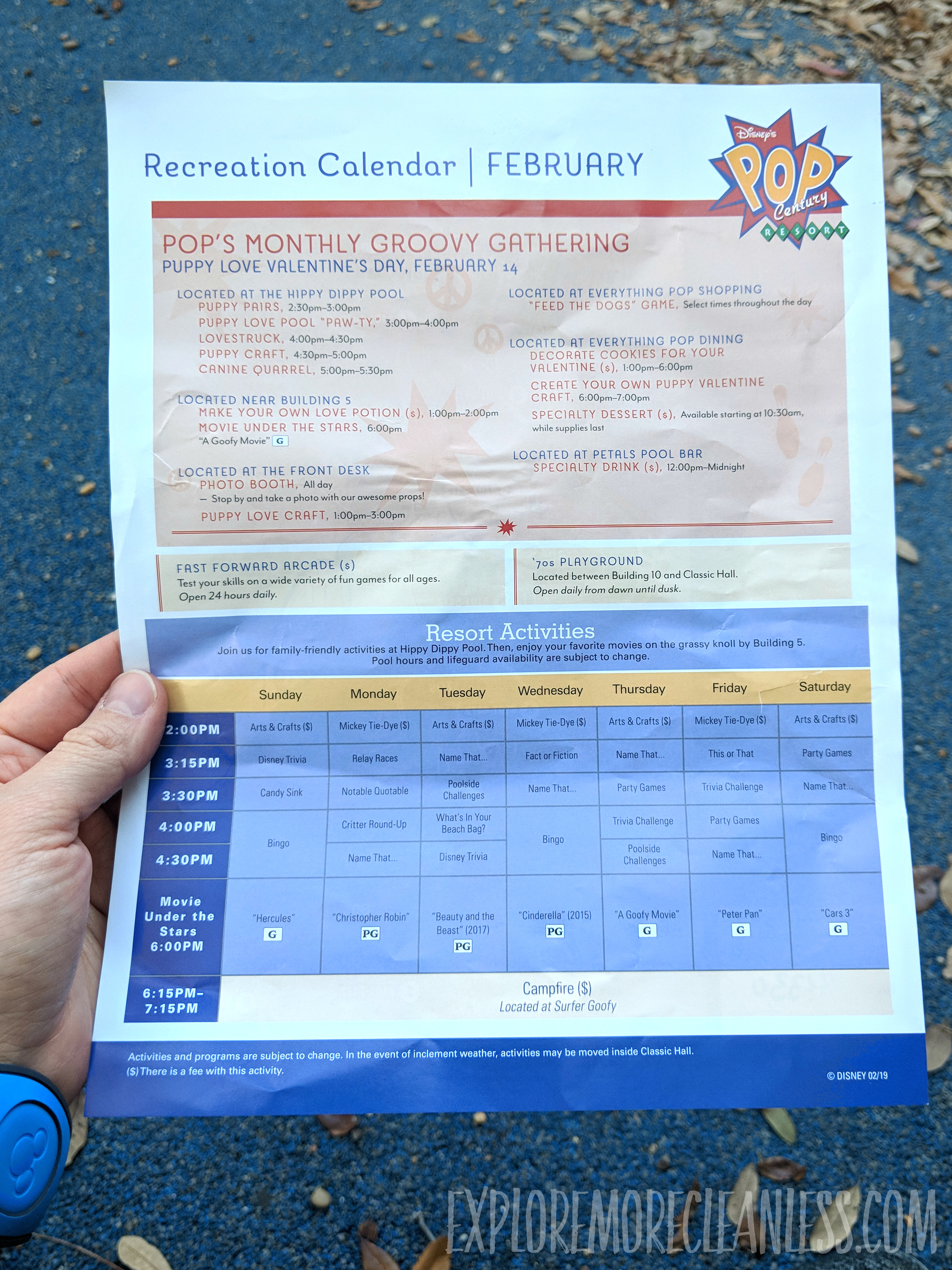 Something I didn’t know before we got there was that the resorts have regular activities! A few cost extra but some were free. We were too busy to take advantage of any but it was nice to have them. 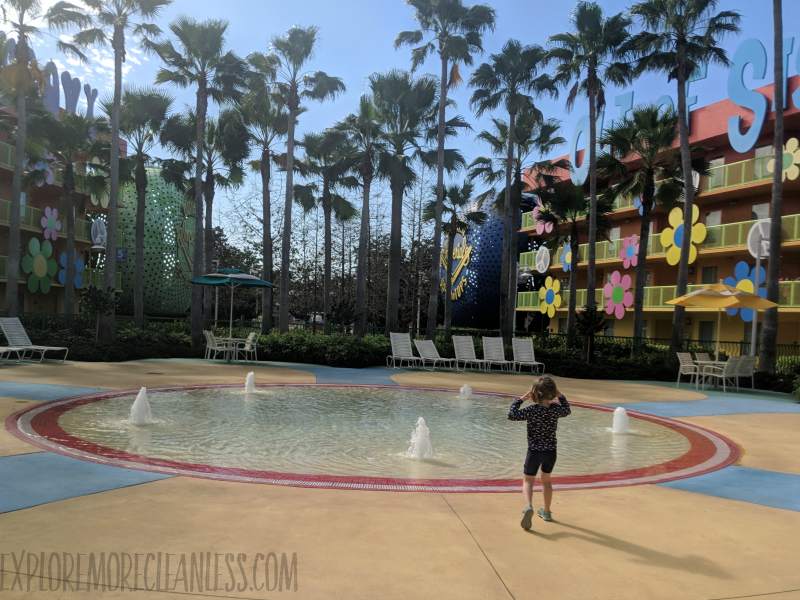 I didn’t take a picture of the big pool but it is pretty standard. The budget hotels don’t have water slides but the pool was fun and there was a separate splash pad pictured above! There was also a small playground, which was a great place to burn energy the first night we got there. Not pictured is an arcade as well, which we spent a little time in as a fun novelty. 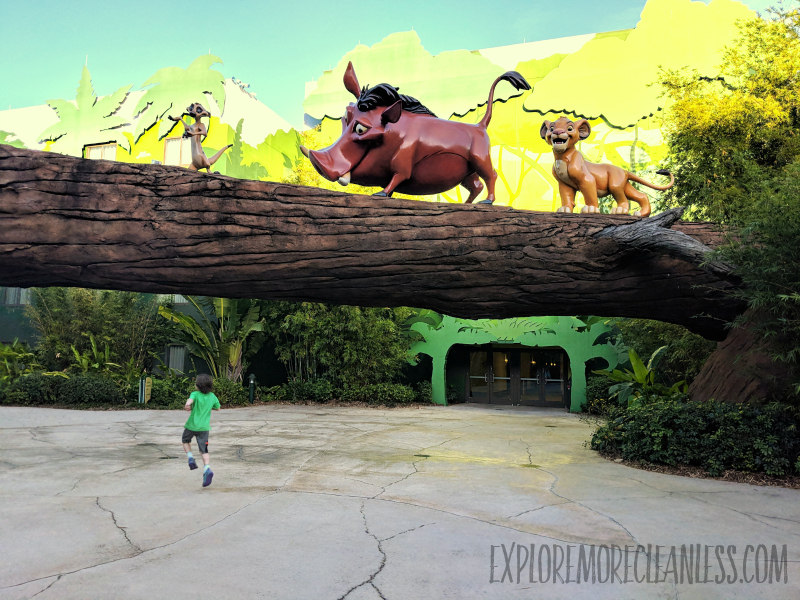 Some folks complain that the theme-ing at Pop Century isn’t very “Disney” but it didn’t bother us. It’s within walking distance to Art of Animation resort where you can see the fun big statues – but you’re not allowed to use their pool unfortunately. 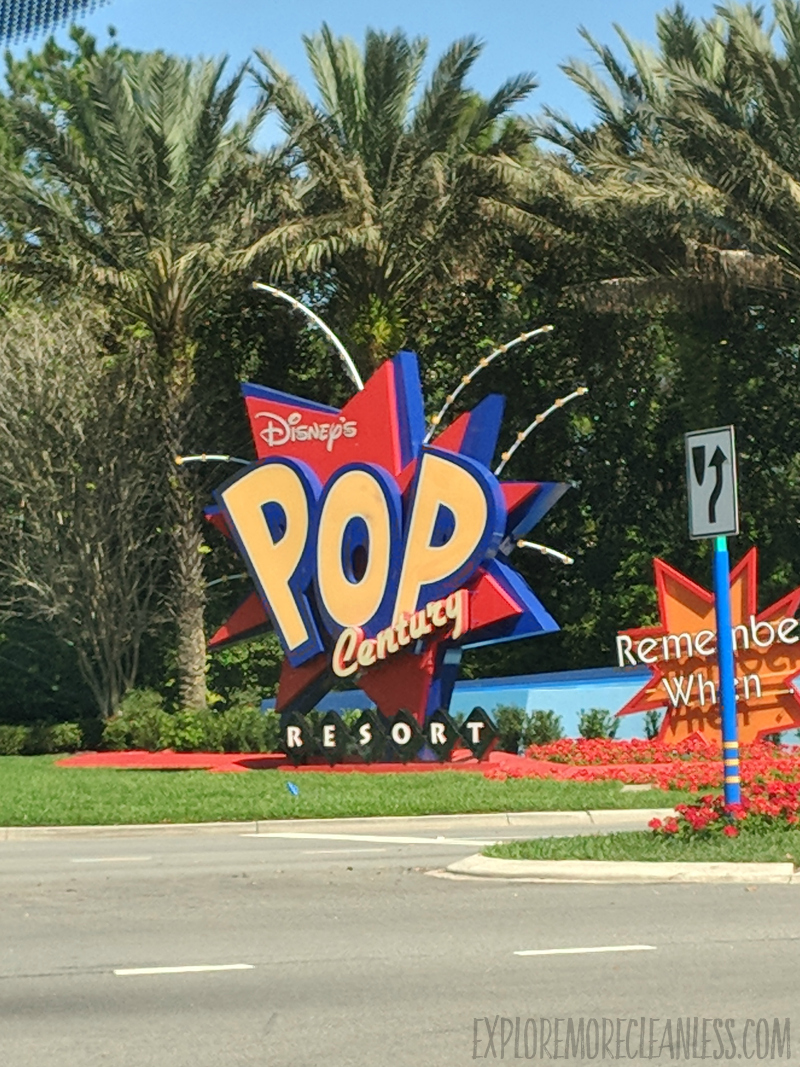 We were happy with our choice and would recommend Pop Century without reservation, no pun intended. We used the laundry to cut down on packing, enjoyed the pool, and liked how close we were to the shuttle buses.

We had 5 days not counting our arrival afternoon and planned for 4 days, 1 in each park, with 1 rest day. It was a good fit for us and we jam packed the days, staying from open to close more or less!

My #1 tip that I wish I could go back in time and tell myself? Research every ride your kids are interested in ahead of time, even if it is in the park on your phone! My son is sensitive and we ruined an afternoon trying to take him on a ride (Avatar’s flight of passage) that had an intro scene that terrified him. If I’d realized you could watch ride videos ahead of time, it would’ve saved us all a lot of tears (although he did recover, thankfully).

I am not going to link every single ride but it’s safe to say there are specific reviews all over the internet for each one if you’re curious or want to do more digging! 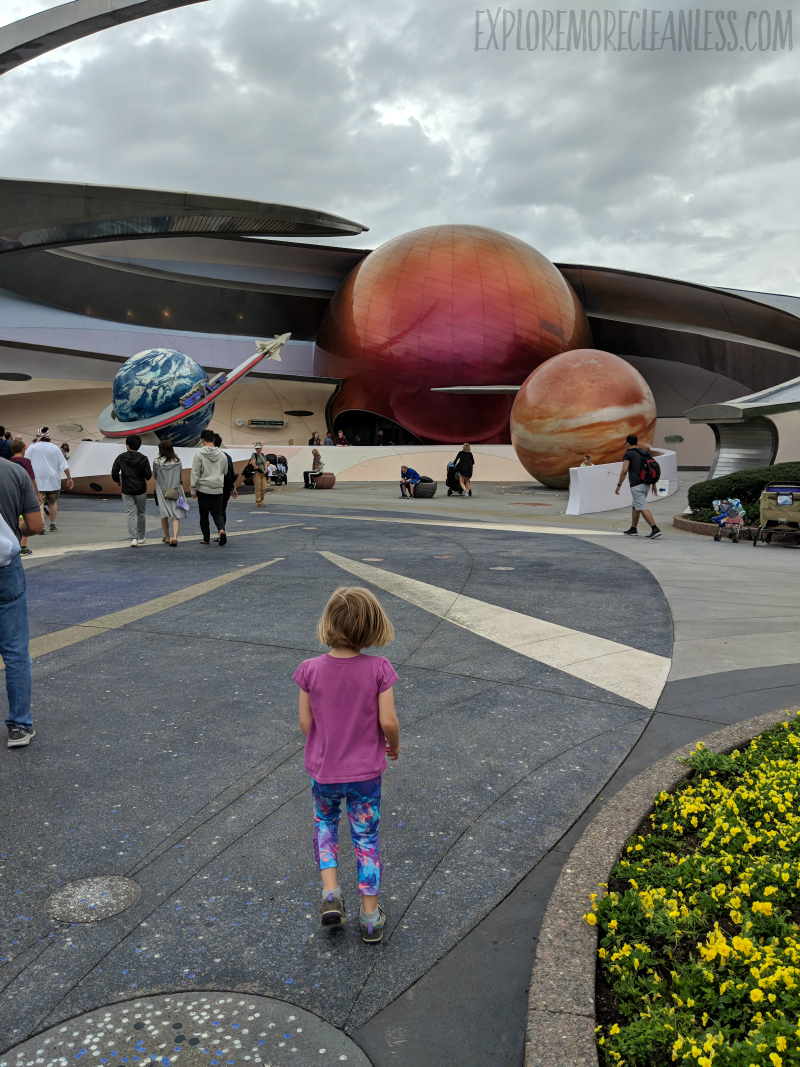 Epcot is broken into two parts – Future World, which has the bulk of the rides, and the World Showcase that has the bulk of the food ( includes Mexico, Norway, China, Germany, Italy, Japan, Morocco, France, United Kingdom, Canada). I can’t believe when I read people planning to skip this park with their kids, we absolutely loved it. 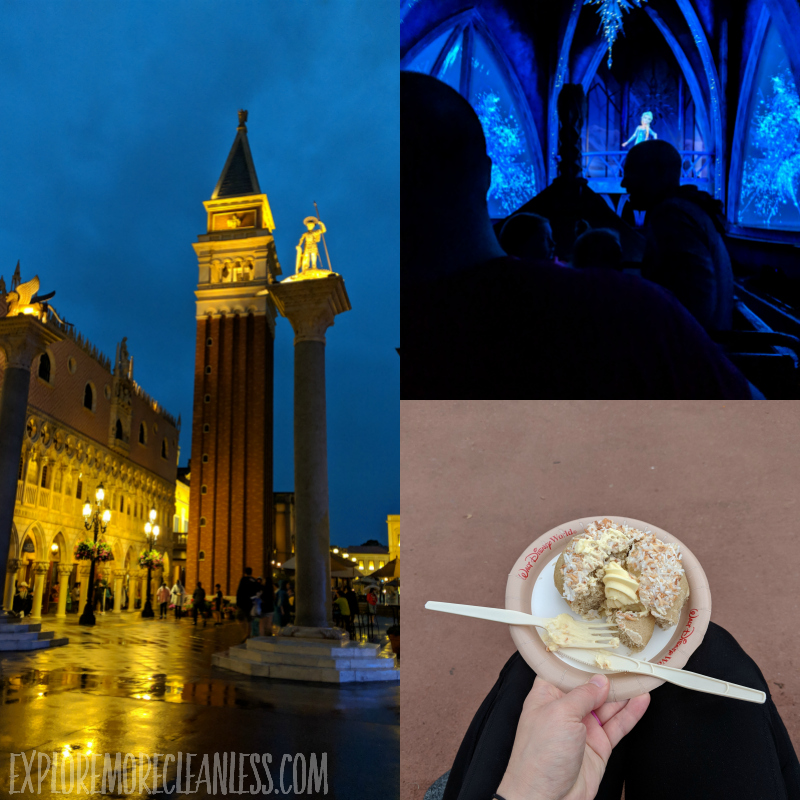 Something we didn’t do was the kid’s passport program; it was a little kit you bought in the park at one of the kiosks and had stamped at each country. This park was HUGE and I quickly realized I should’ve strategized a little more in terms of walking time between fast passes and dinner, but we survived. Pictured above is the “school bread” which is apparently very popular and for good reason, it was delicious! I got it at the Kringla bakery in NOrway. 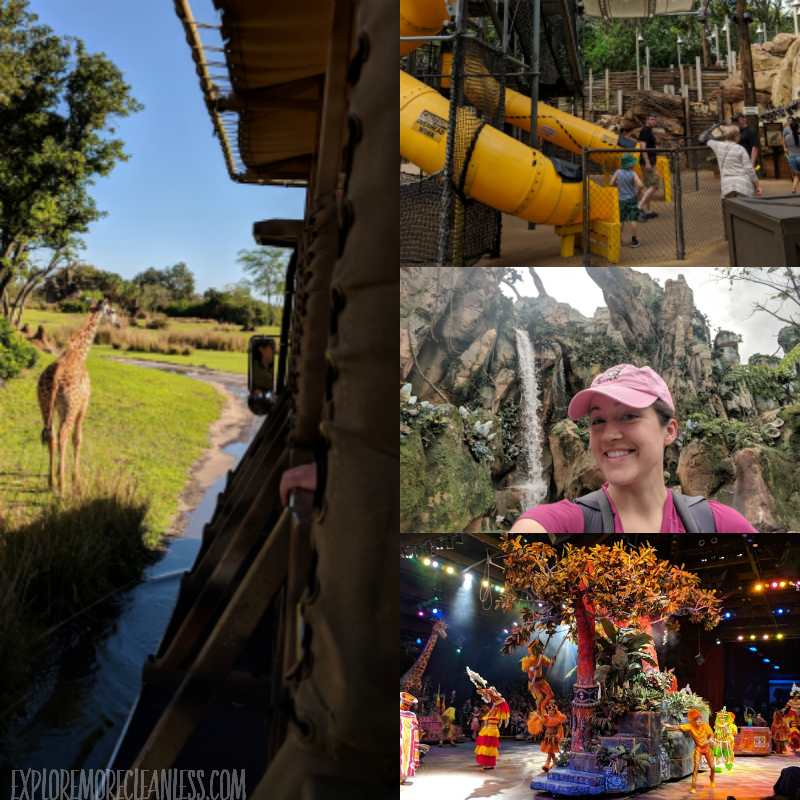 Online Disney fans seem to get very angry when you suggest AK is similar to a zoo, but guess what, I think it is. There is one section focusing on animals + Africa, one section loosely based on carnival rides + dinosaur bones and then another section called Pandora, from the Avatar movie. I wouldn’t advocate skipping it because we loved the Lion King show and my kids enjoyed the safari ride but if I had to cut one park, it would be this one. 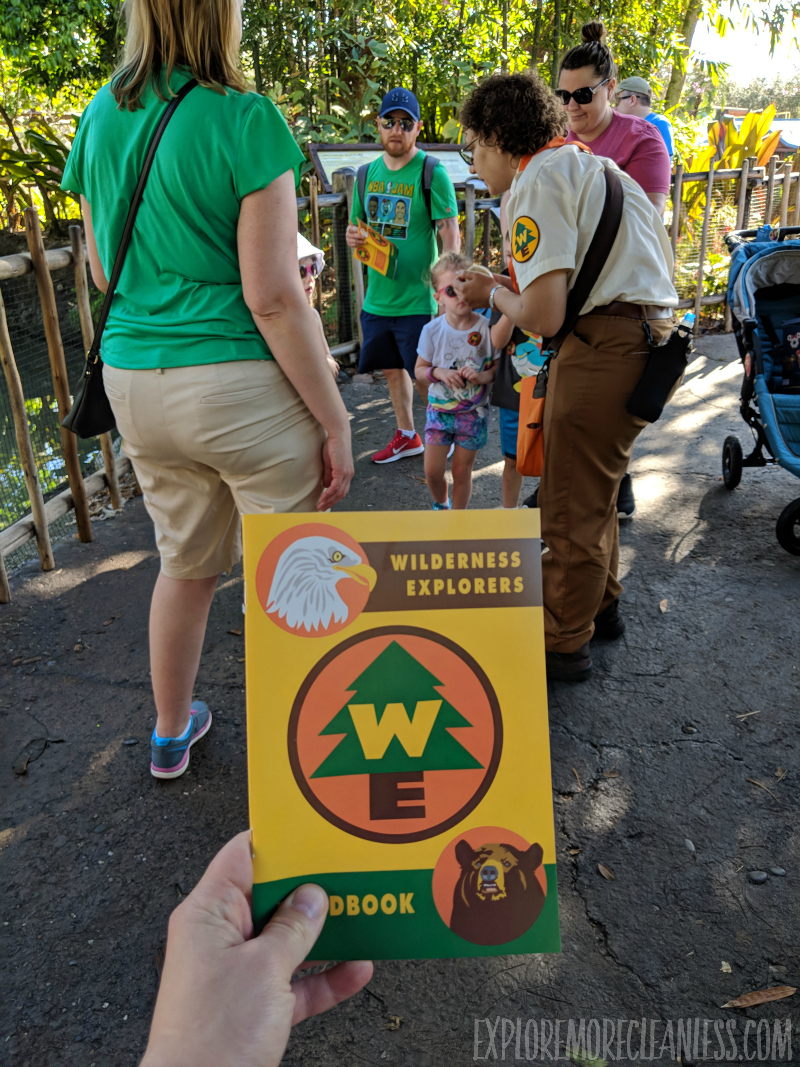 Another bonus is this cute Wilderness Explorer booklet. We didn’t finish it but each animal spot has a little activity and you get a sticker if you complete it, this was a fun free option.

There aren’t fireworks in the finale show here for the sake of the animals, and we left before it. 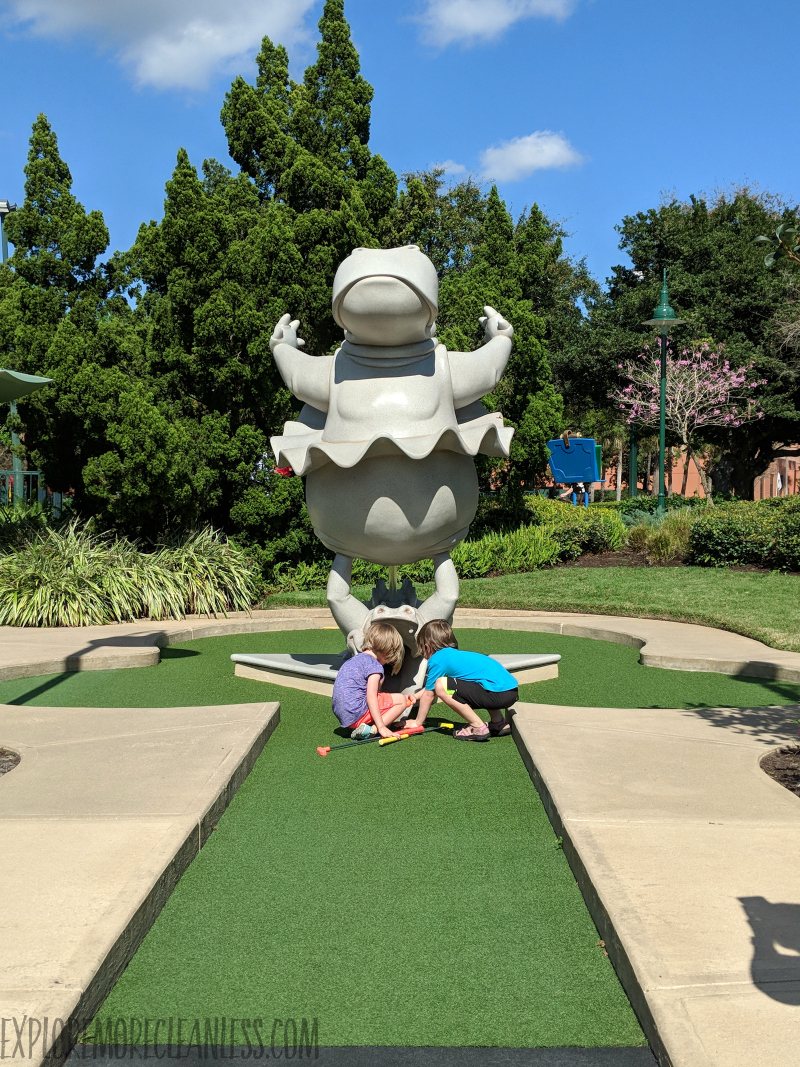 I don’t know if it is standard or a special but we got tickets for free putt putt with our resort reservation, so we hopped over to Fantasia Gardens & Miniature Golf for a bit on our “rest day” in addition to swimming and exploring Disney Springs. I wouldn’t pay their asking price but it was a cute little course albeit a sunny one. 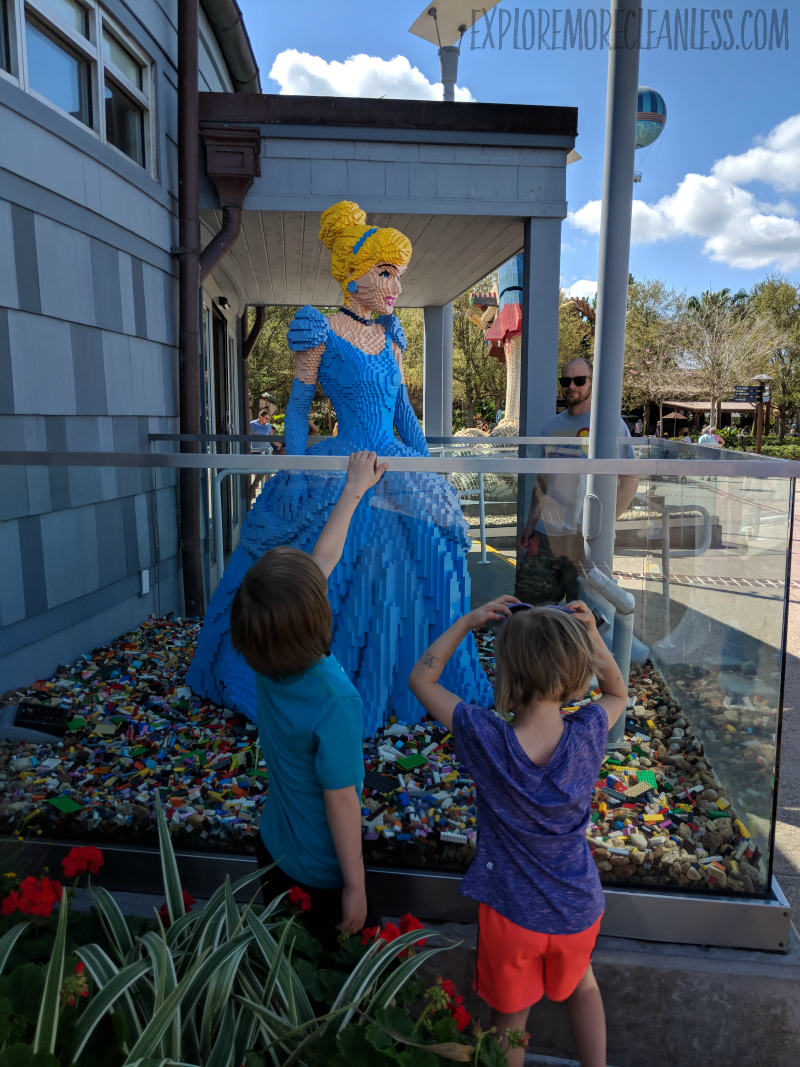 Then we finished at Disney Springs, where we ate at the T-Rex Cafe and poked around the Lego store. The T-Rex Cafe was really fun, similar to Rainforest Cafe with dinosaurs, and the food was surprisingly good. The Lego store had a big play area for building and racing cars, it was a great place to kill time. I wouldn’t seek Disney Springs out necessarily but it was a nice spot to take a breather from the parks. 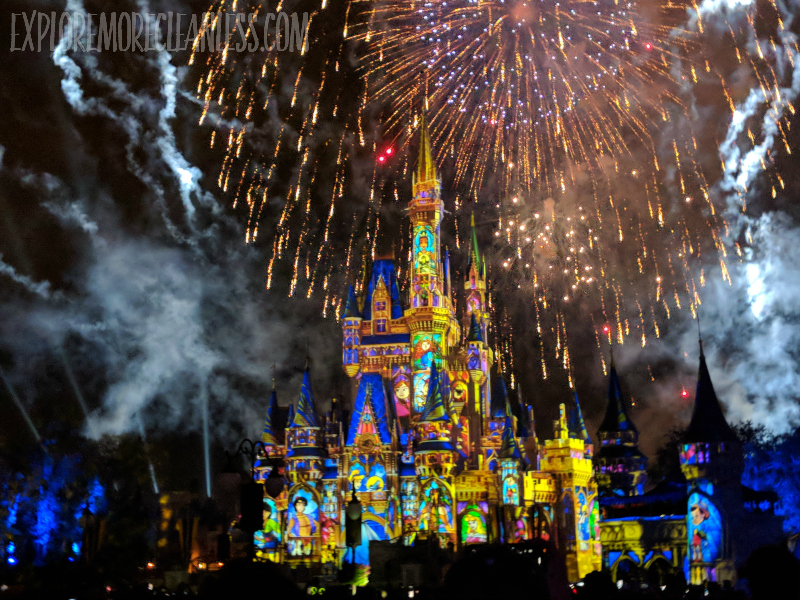 Magic Kingdom is what people typically think of when they think of Disney World and we were excited to explore it! It’s broken up into a few different sections: adventureland, fantasyland, frontierland, liberty square/main street, & tomorrowland. 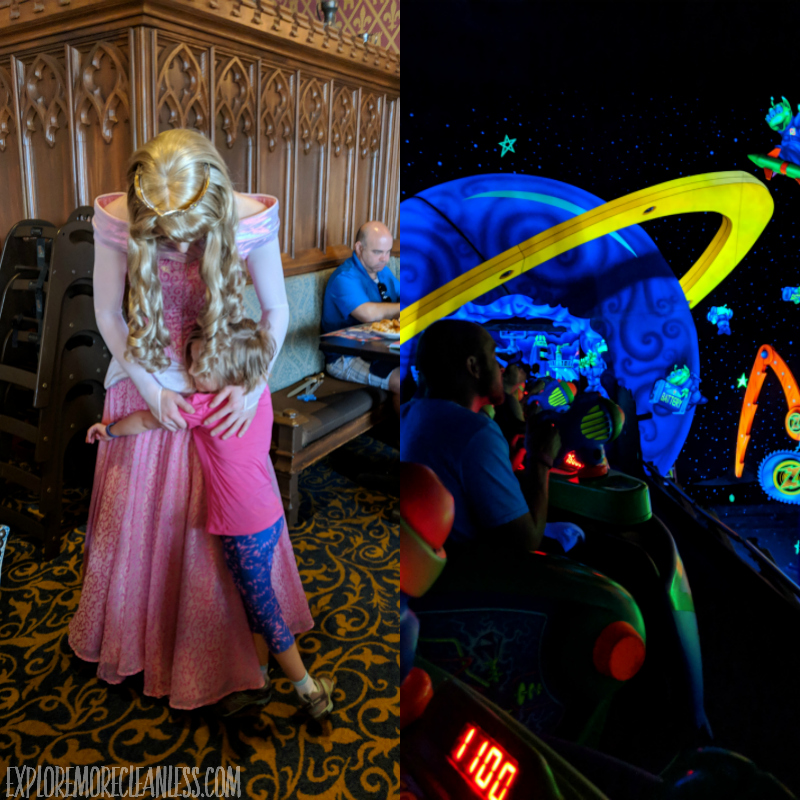 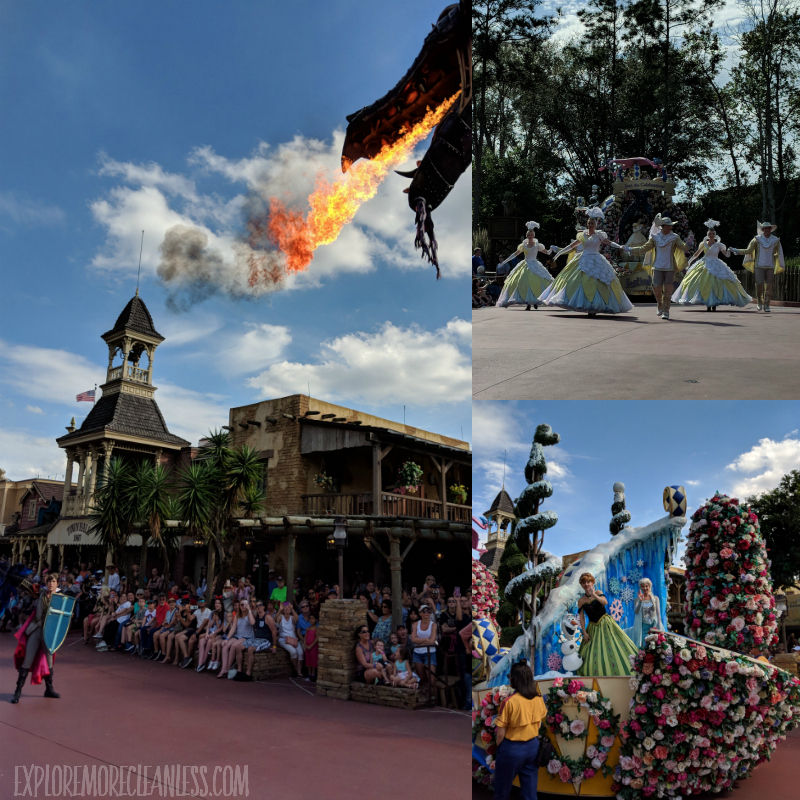 We had such a fun day here. Two cool things we didn’t do but you might want to check out are virtual, interactive games through the park: A Pirate’s Adventure ~ Treasures of the Seven Seas game & Sorcerers of the Magic Kingdom game. 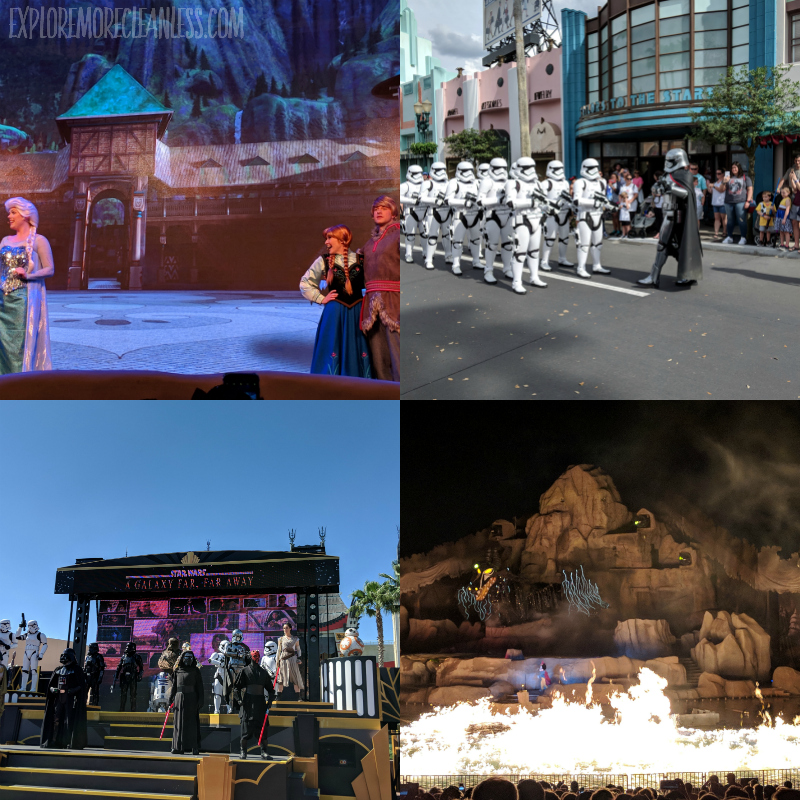 It seems like a lot of people choose Hollywood Studios to skip if they have to pick one, but we really loved it. This park has less clearly defined zones but they include echo lake area, grand avenue area, Toy Story Land, animation courtyard, sunset boulevard, and the brand new Star Wars: Galaxy Edge area (that wasn’t open yet when we were there). 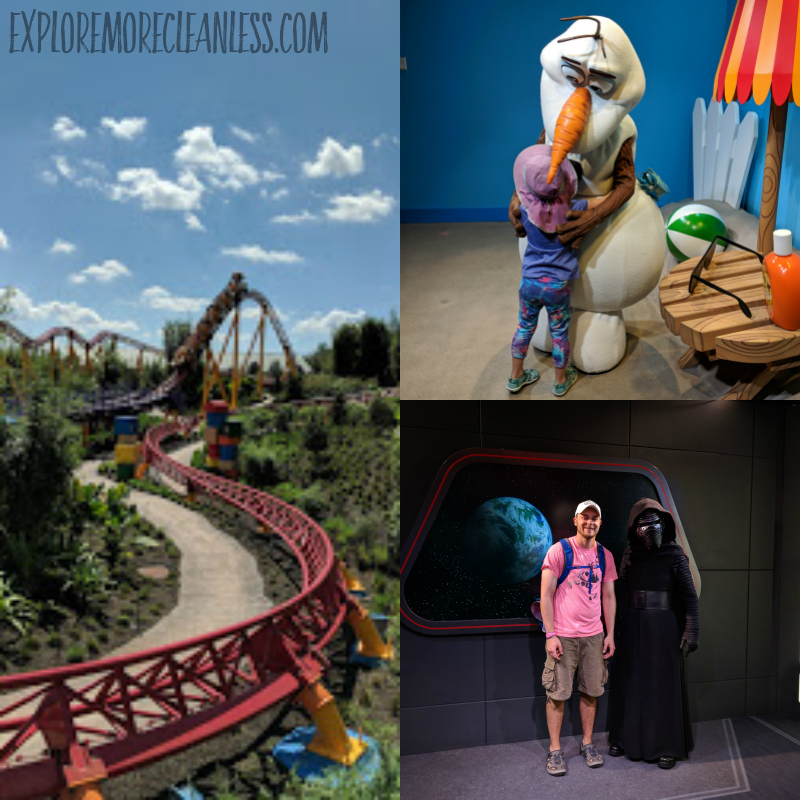 One thing we didn’t do was the free jedi training event. We’re excited to read more about Galaxy’s Edge this fall.

Like I said, we had a really good time to our own surprise. People talk often about “disney magic” where the cast members go above and beyond to make a kid’s day or fix a problem and while we didn’t see any of that ourselves or secondhand, everyone was super nice, everywhere was super clean, and it was fun to be at a place that 100% accommodated and was excited to host families with kids. We didn’t see a ton of fighting, angry parents or whiny kids like I was a little worried about, and enjoyed the mix of eating, shows, rides, and things to look at. I hope the list of our favorites and what we did helps someone else plan well!

Have you been to Disney? What’s your take?