You are here: Home / Travel / Grand prismatic spring hike on fairy falls trail to imperial geyser
(this post may contain affiliate links, which means I get a small % back if you purchase after clicking, at no cost to you- refer to 'legal stuff' in the menu for more info)
299 shares 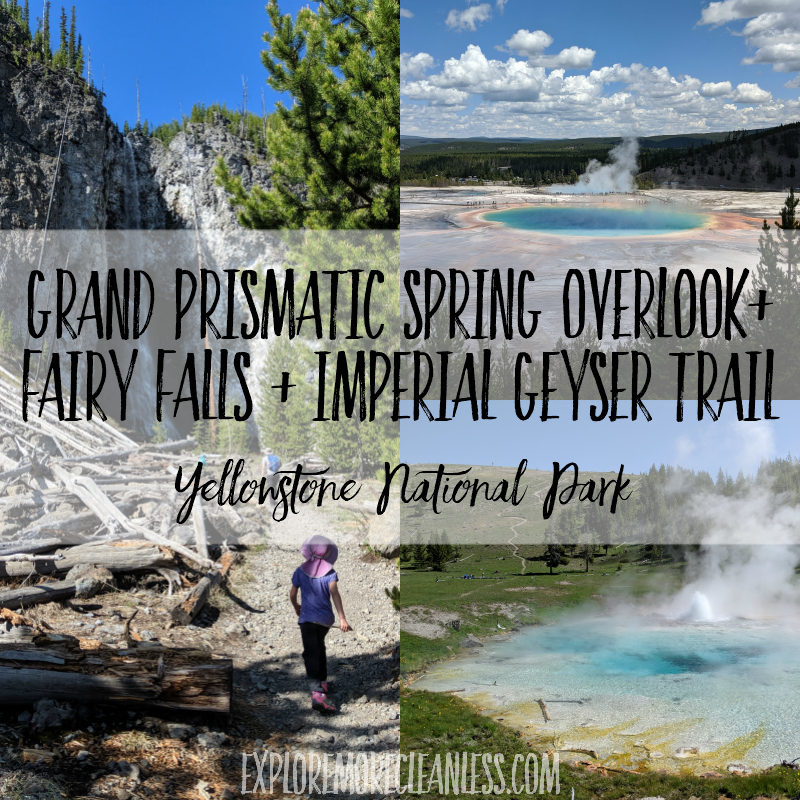 This was our absolute favorite hike during our week at Yellowstone but it was tricky to find information about it ahead of time! The Grand Prismatic Spring Overlook trail spur is relatively new, and between two websites and two books, they each had different mileages listed and incomplete information about each. I thought I’d write a specific blog post about this hike that took up to the overlook, out to fairy falls, and beyond to imperial geyser (and then back) in the hopes that it encourages another family (or couple, or individual) to make the entire trek like we did!

If you’re planning a trip to Yellowstone, you’ll want to check out these other posts too!

Pin this post about the Grand prismatic spring hike on fairy falls trail to imperial geyser with this link or collage photo: 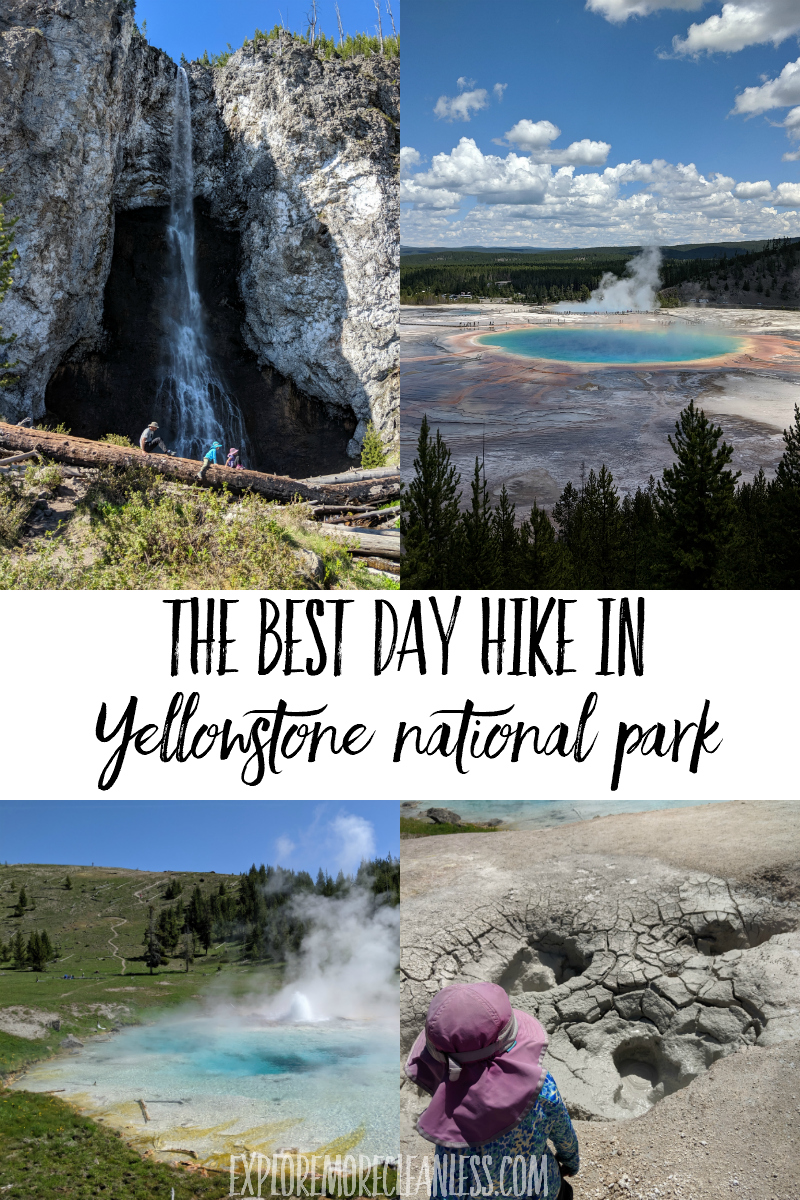 This hike was somewhere in between 7 & 9 miles in its entirety! I don’t have an app to track my steps and all of the trail maps I could find disagreed with each other. The good news is, it did not feel like the longest hike we’ve ever taken, at all! Almost completely flat with a fair amount of shade, this felt much shorter.

I drew/added text on some screenshots that I took, using the trail map here. The trail map at the actual trailhead didn’t show the whole picture. 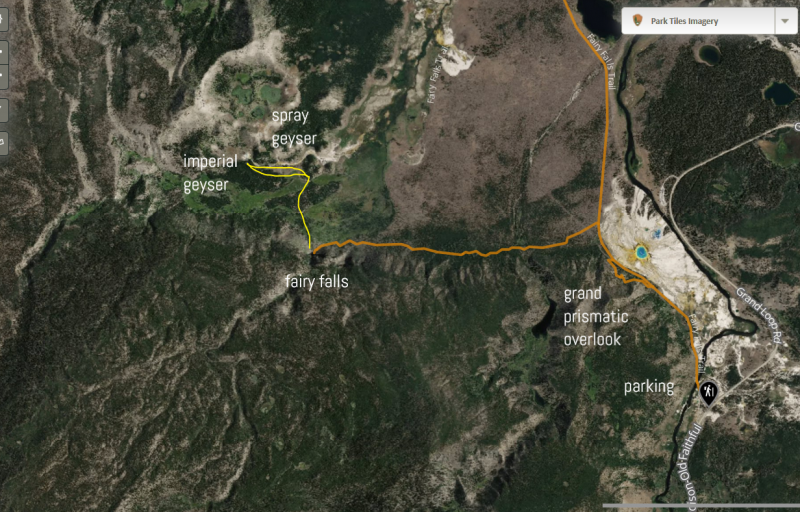 The above shows the entire route from above, with parking to the right, the grand prismatic spring overlook trail spur that loops off to the side, taking a left out to fairy falls, and then continuing out to the two geysers. Ignore the orange path that goes straight north; that is another, much longer trail option. 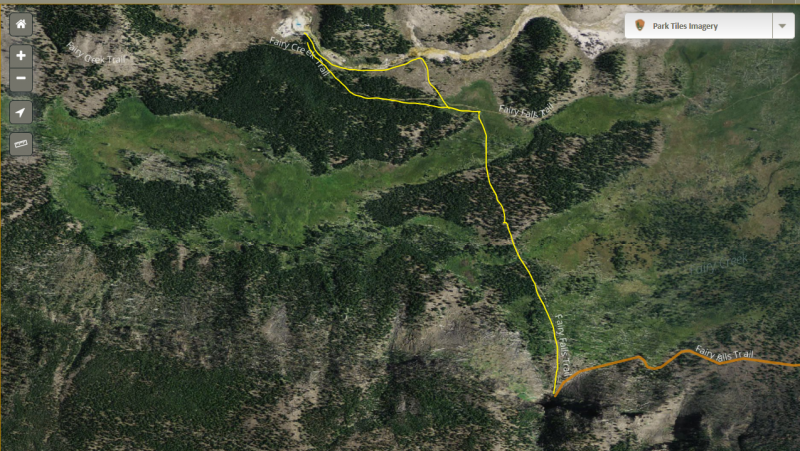 Above is a zoomed in version of the two geysers! The first one you come up to is spray geyser, which is relatively small, and then you loop over to imperial geyser, which you can barely register as a blue pool in the above. There are two rough paths in a loop-ish shape between the two, they’re easy to find and we took one in and the other one out.

We were there early enough to get a spot in the small fairy falls trailhead parking lot; if you don’t see any open, you’ll have to drive further down and park in the biscuit basin parking lot instead. This will add distance to your hike, so if you have little legs drop them off now and then hurry to catch up. 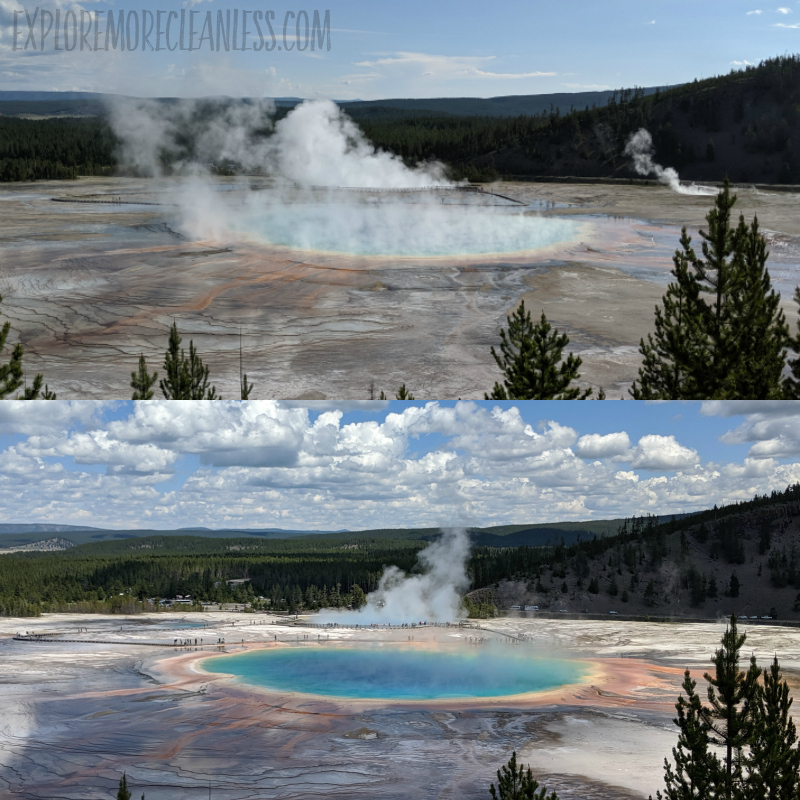 My biggest tip for this trail? Do the overlook on the way back, even though you’ll be more tired! We did it with our kids first thing, which is the picture on top of the above collage, probably around 8:30 AM. On the way back, I decided to swing up again but they were too tired, giving me the photo on the bottom, probably around 1 PM. It was much more vivid in the hotter afternoon sun! 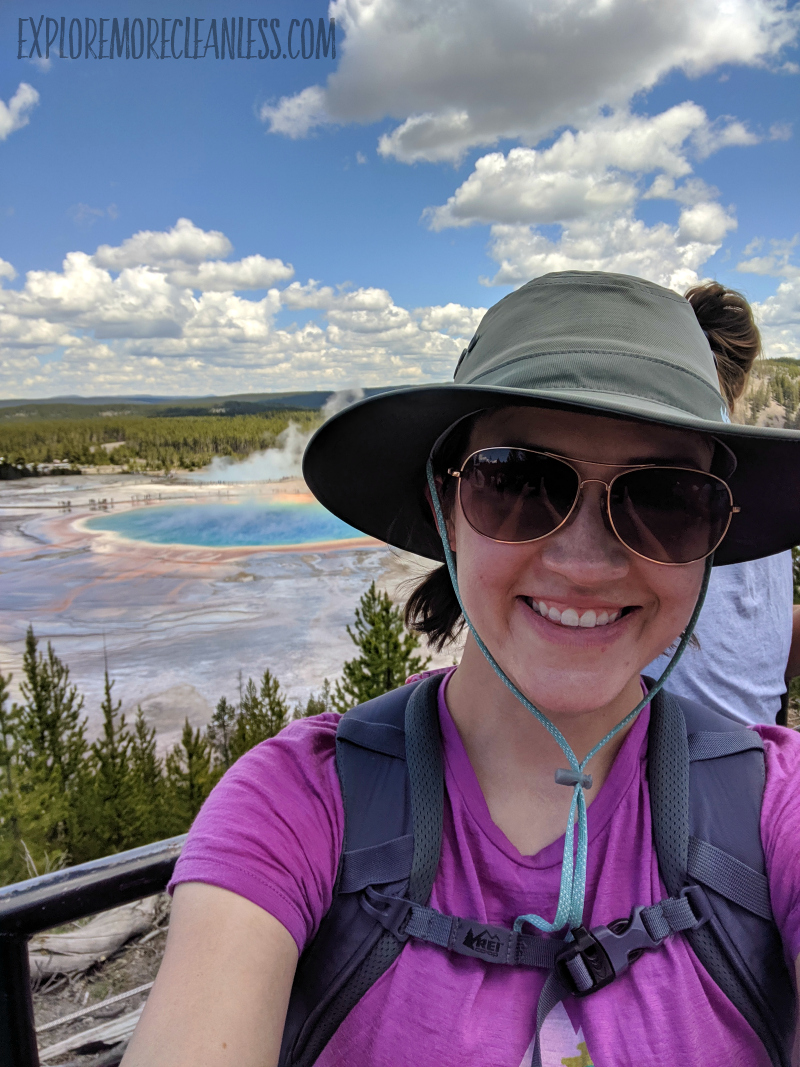 Totally worth it! Normally we like to see the most beautiful things super early so it isn’t as crowded, but this is one exception to that rule. 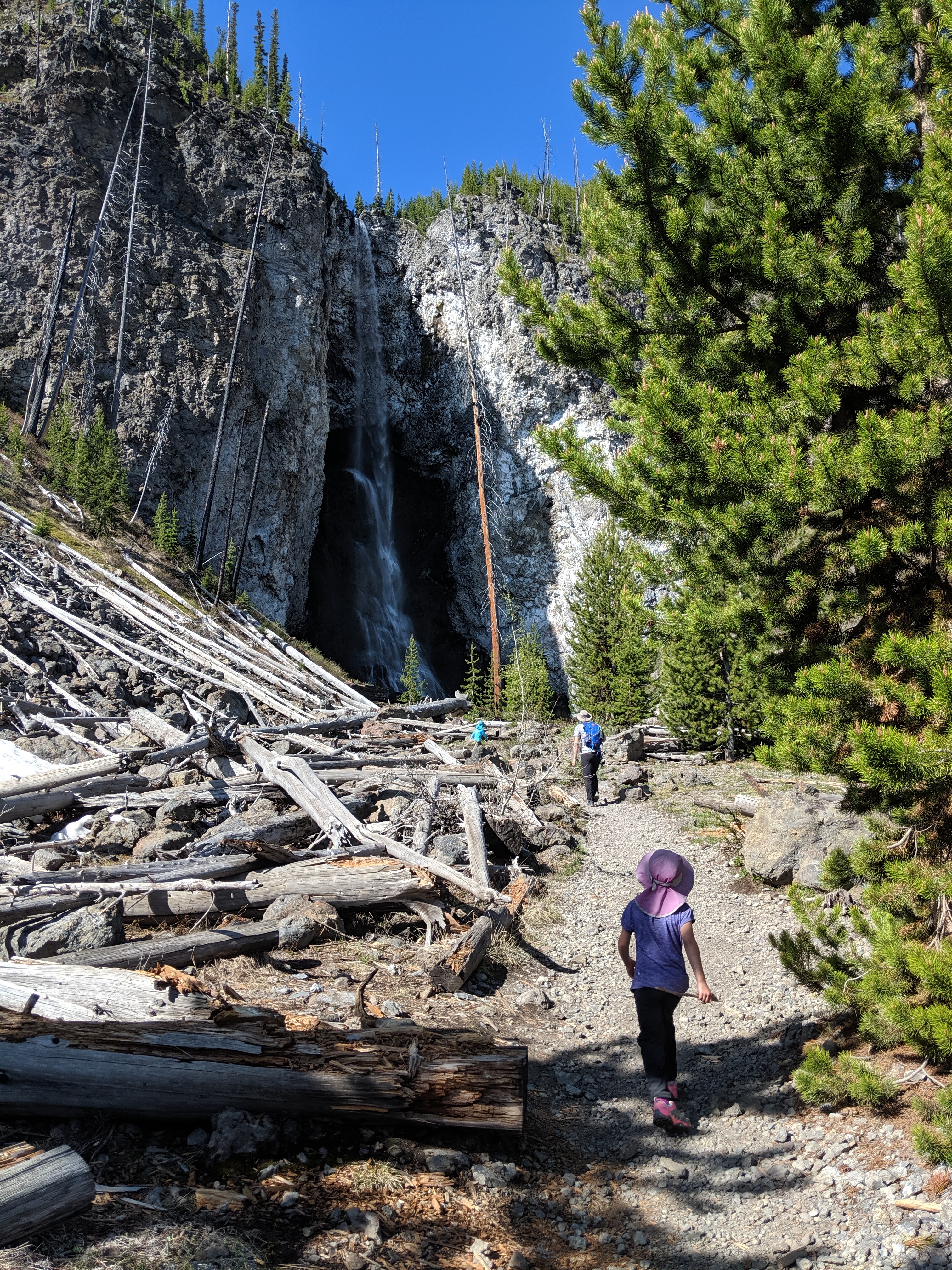 I didn’t take any pictures on the trail leading up to the waterfall because it was pretty nondescript! A wide gravel trail away from the overlook lead to a forested, flat dirt trail all the way up to the above. We were delighted to find some snow on the ground still! 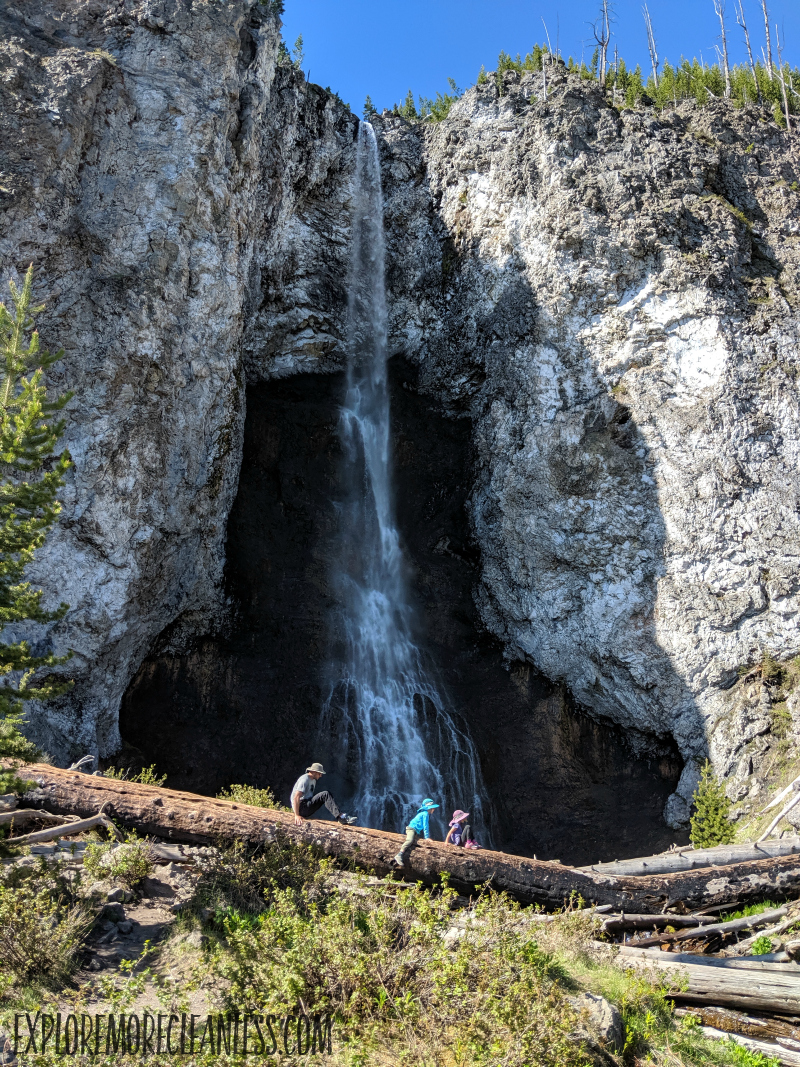 We had the waterfall to ourselves for a while, and explored some of the logs at the base before having a snack. Be forewarned, there are aggressive chipmunks here! Please do NOT feed them. 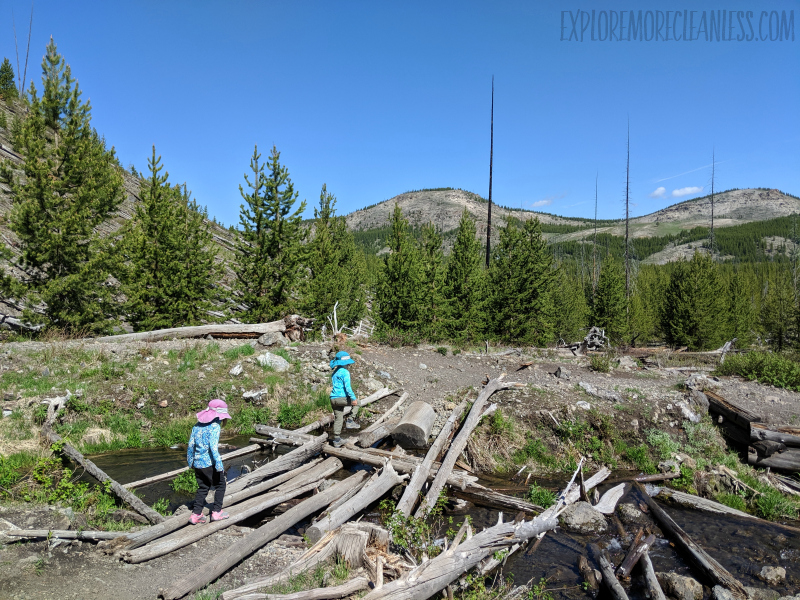 If you look off into the distance when you’re by the waterfall, you can see the geysers! Head over this log trail and the path is pretty clear. It was soggy in several spots, but we got through with dry feet. 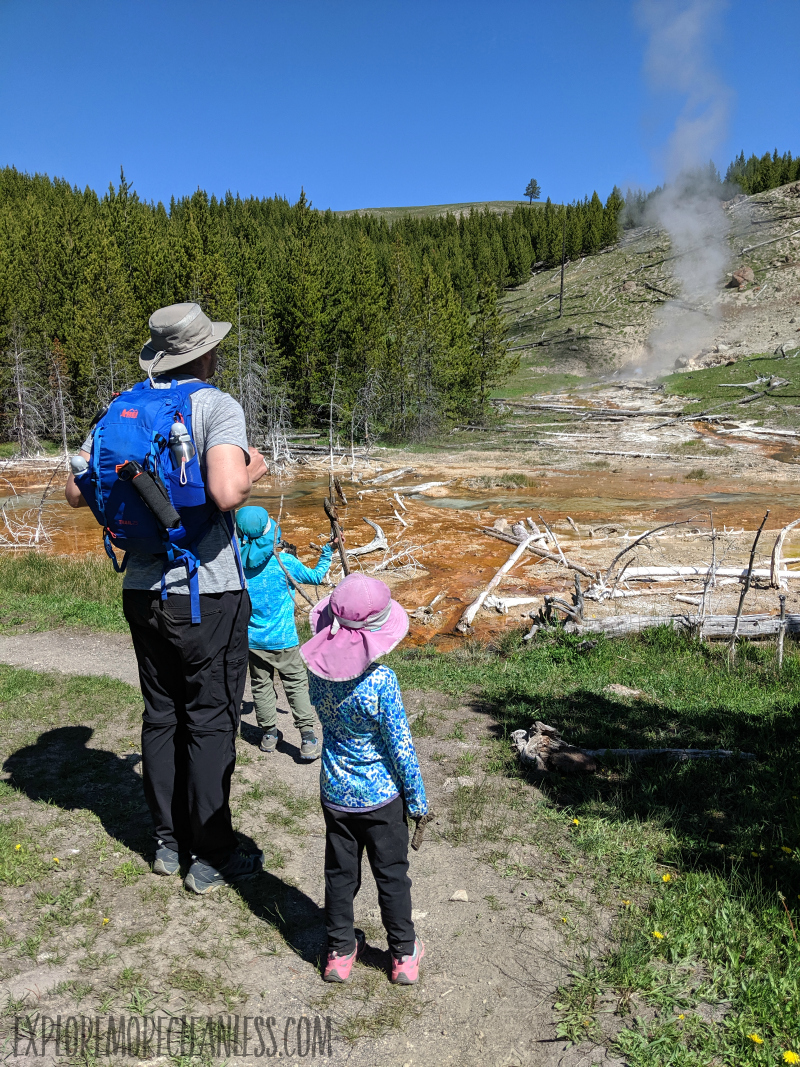 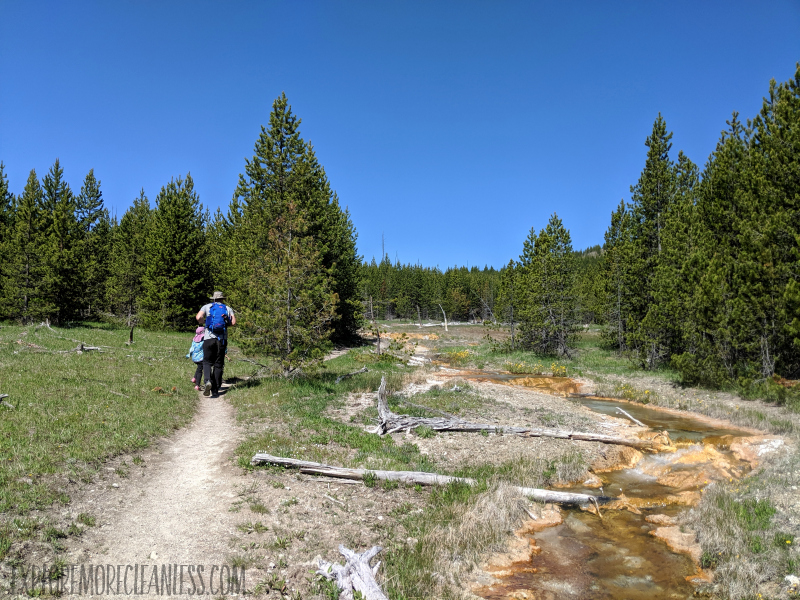 We following the burbling creek and marveled at the pretty wildflowers flanking its banks. 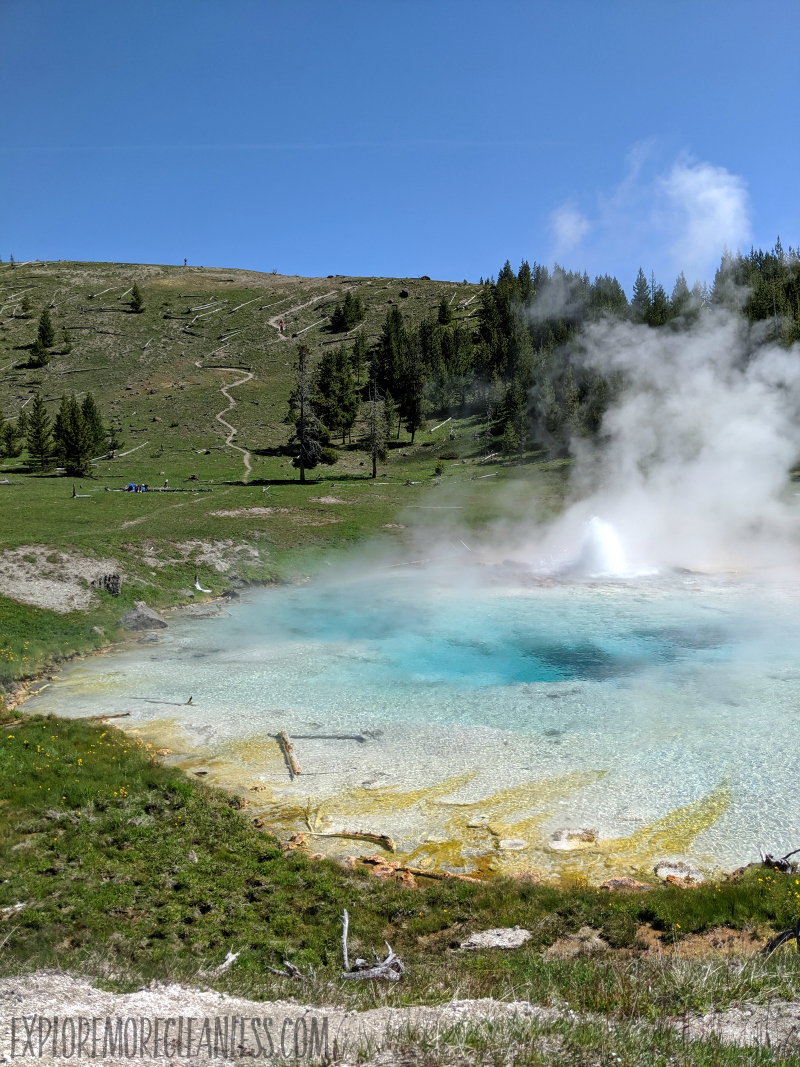 Only to come up on Imperial Geyser! Now this felt like a gift. We had it almost completely to ourselves and it was beautiful. We watched it erupt, hung out by the side, and explored the area nearby. You can see that winding foot path in the background; my husband and I both went up it but I do not recommend doing it with kids, it is insanely steep. 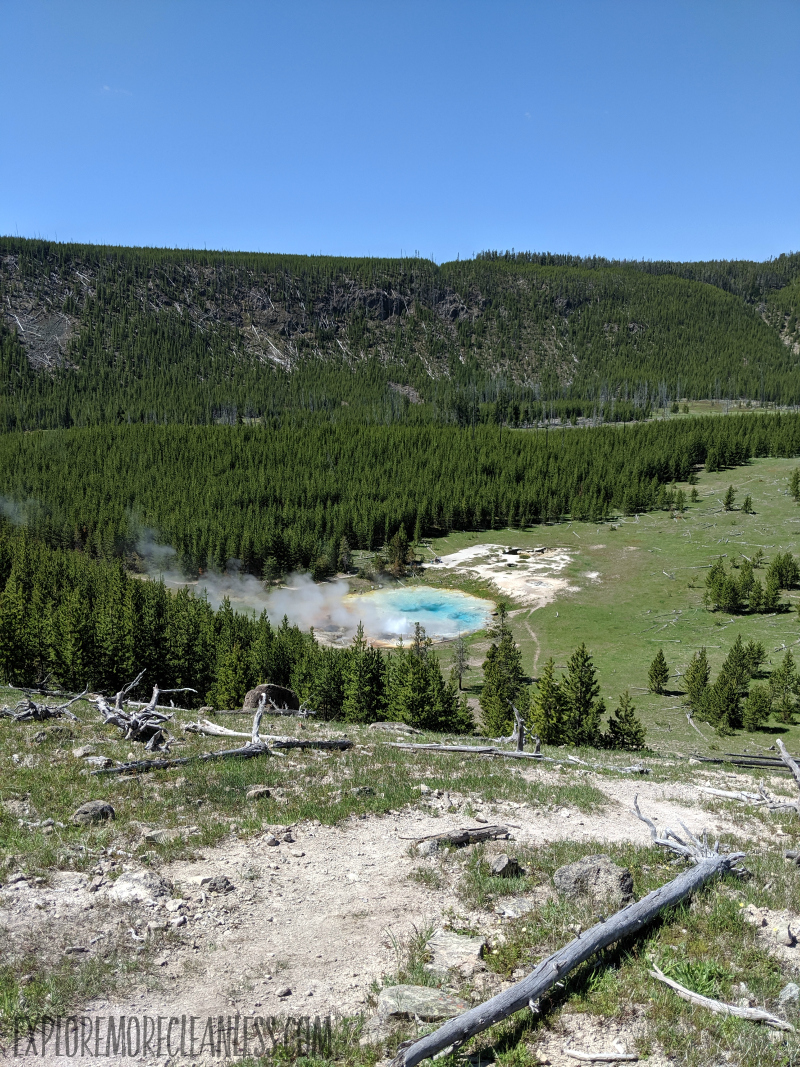 The view from up top! You can just barely see fairy falls and grand prismatic spring when you are standing up here (but not in this picture). 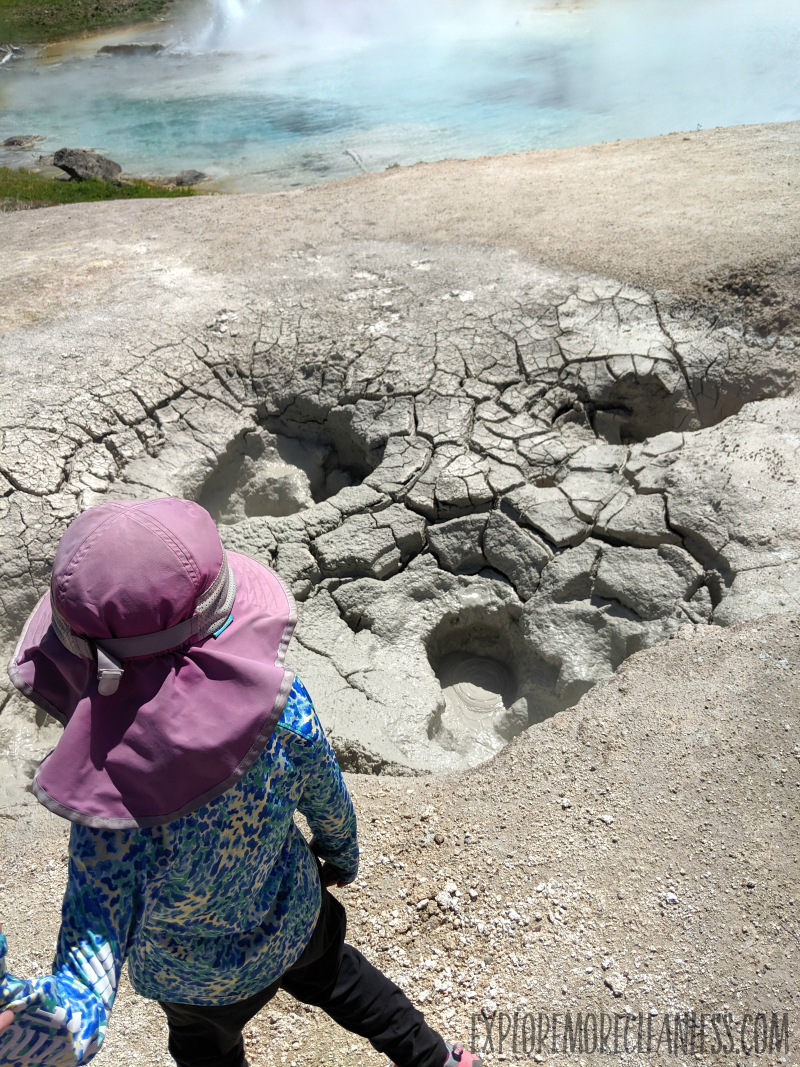 On the other side are some mudpots too! It felt extra cool and special since we worked hard to get out there, and I loved just relaxing without the crowds. Taking the trail back was simple and uneventful, wrapping up our very favorite hike in the park.